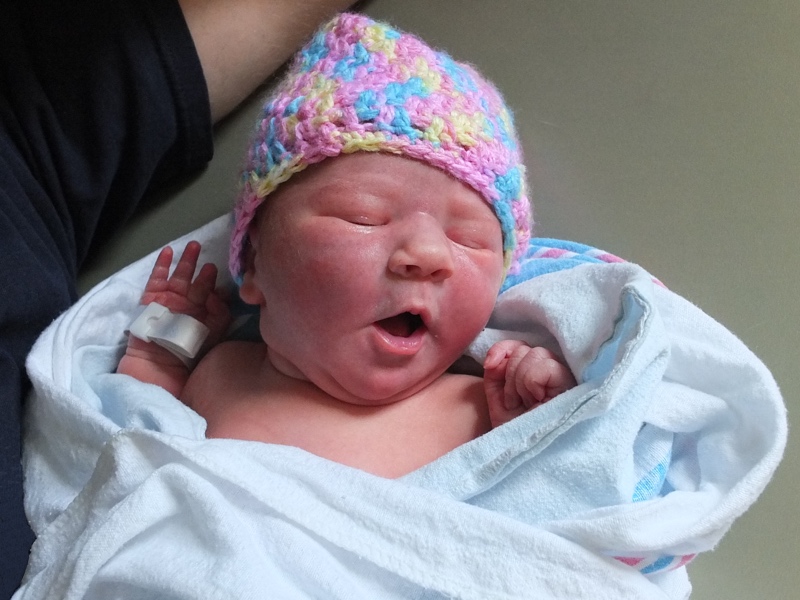 This being my third pregnancy, and the first two kids, boys (both born early), we were prepared for this baby to come up to a month before my June 4 due date. As the weeks kept coming and the baby was still comfy inside, I was beginning to get more and more impatient.  About a week before my due date, my midwife checked to see if there was any dilation starting to happen.  I had not begun to dilate at all and could not get a stretch and sweep either to see if we could get labour going. June 2, I had another appointment and was starting to dilate so the midwife did a stretch and sweep.  She told me I would likely have some cramping in the afternoon which was normal.  I took the boys to the park and splash pad, cleaned the house and made a nice big dinner.

After having no cramping at all, I decided to have a long bath before bed to see if it would get labour started. The bath was so enjoyable I stayed in until past midnight; this was foolish in hindsight.  Around 2:00 a.m. I was woken to pain in my back, nothing unbearable, but definitely enough to wake me.  This continued every ten minutes for about an hour before I woke my husband and told him he was not going to milk cows in the morning. Contractions were now still in my back but also being felt in my front as well.  I decided to call my mom, who would watch the boys, so that if labour progressed we could just head to the hospital.  Once she arrived around 4:15 we decided that since it was getting harder for me to focus on anything but each contraction, I would call Nicole to see if we should head to the hospital.

We arrived there around 5:00 a.m. and I was just over 5 cm dilated.  While this was nice to hear I was really hoping I was further along. Contractions were now my only focus.  Both my husband, Jon, and Nicole were doing so great encouraging me and keeping me calm and focused.  I was able to walk around my room and change positions as I felt my body needed me to which was extremely helpful.  Around 7:00 a.m. I was starting to get very tired — note the foolishness of staying up past midnight, and discouraged at the length of this labour as my previous one had been only 3 hours from first contraction to baby born.  I was torn with whether or not to get the epidural as I really wanted to go natural, but I was becoming exhausted and wanted a chance to rest. 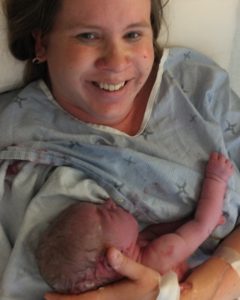 Nicole suggested I try going in the tub for a bit to see if that helped before making a decision.  Once the tub was full she decided to check how much progress my body had made.  I was 10 cm and soon ready to start delivering this baby once I felt I needed to push.  I planned to head to the tub until that happened.  Once I stood up from the hospital bed I had a nice strong contraction, my waters broke and I could feel, with my hand, my baby’s head starting to emerge.

Jon helped me get back into the bed as I felt I could not move anywhere and the baby was coming.  Since we were not expecting to be this far along, my second midwife was not planning to arrive until 8:00 a.m., Nicole called and three nurses rushed in to assist.  By this time baby’s head was almost fully out.  I clearly remember my midwife calmly sitting on the foot of my bed talking to me, letting me know that baby’s head had come out and I needed to give one little push for baby’s hips to come through.  One little push and baby was here! 7:56 a.m. Baby was placed immediately onto my chest and was perfect.  Janessa and Maggie arrived to relieve Nicole and they were pleasantly surprised to see a baby already.